So now we’re ready to deploy our own custom R Shiny server with caching.

We had previously already discussed the pros and cons of

See this https://arthought.com/r-shiny-stock-analysis. Then we had opted for option 2, mainly to avoid complexity. We chose the free plan option, however there is a fairly tight limit on the number of hours the free-plan shinyapps.io based apps will run. On the other hand, the non-free shinyapps.io pricing options, while very practical, might be a stretch for some people’s budget, the starter package is currently at 9$/month.

Therefore in this post we deploy a server on digital ocean on the smallest droplet, which currently is at 5$/month. This is a link to the digital ocean pricing options.

We want to achieve the same functionality as the already mentioned predecessor post, namely plotting various analyses of a DAX-stock vs the DAX index itself.

In order for this to work as smoothly as possible we make use of caching, as discussed previously.

The app code can be found on github.

The other part of this post concerns how to spin up the docker based RShiny server, the necessary files are also on github.

Bear in mind that I might not run the demo-server indefinitely, or that it might not be responsive, so first here’s a screenshot: 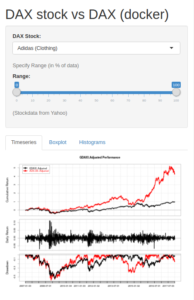 Second here’s the demo (this might take a few seconds to load, after all this is only on a 5$/month plan) :

Let’s discuss the changes in the app code, then turn to the docker definition files.

If you want to see this in a full page view here’s the link.

We have outsourced the job of fetching the data from the web ( which is the component’s list and the financial data) to two external files getDAX_components.R and getTimeseries.R.

Changes in the Shiny Server definition files ui.R and server.R

The changes in the ui.R are shown here:

Let’s take a lock at the docker files:

In the docker-compose-r-shiny.yaml there are 4 points I would like to draw your attention to:

This is the yaml

As for the build file these points I consider noteworthy: